President Uhuru Kenyatta, on Thursday, gave his final word on the demands being made by governors on the funds allocated to counties for the next financial year.

He noted that the country did not have any extra funds to add to what the counties had already been allocated.

“You can not reap what you haven’t planted, we want the counties to succeed but you cant go demanding for money that isn’t available,” the president announced.

He was directing his words towards the governors and senators who were present during the funeral including Governor Mwangi Wa-Iria and Senator Irungu Kang’ata both of Murang’a.

The president further noted that the county bosses should also contribute to getting the source of the money they are asking for noting the government had already allocated the available resources.

“They must tell us where to source these monies from, because we have provided what we have and what we know we can find,” Uhuru retorted.

He went ahead to remind them that only De la Rue firm mints money and the rest of the country had to work for it, including the counties.

This response comes after the governors marched to the Supreme Court in a bid to force the government to increase the amount of money allocated to counties.

The CoG further warned county employees of delayed salaries due to the ongoing tussle between the Senate and the National Assembly. 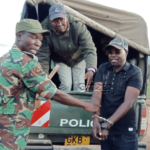