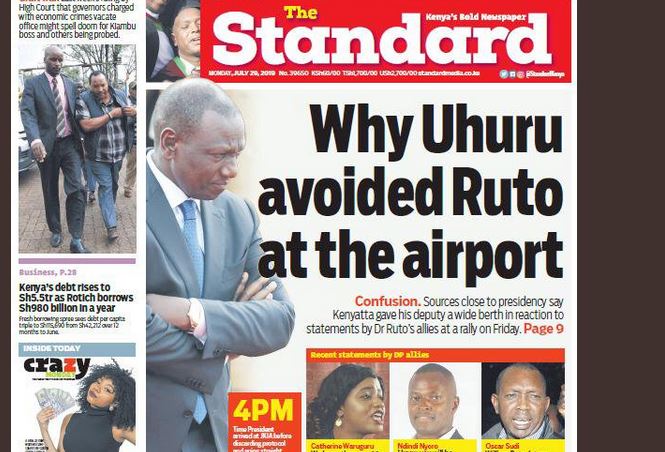 By The Standard Team

President Uhuru Kenyatta’s decision to bypass the presidential pavilion where his deputy William Ruto waiting to receive him and leave the Jomo Kenyatta International Airport (JKIA) through the ordinary passenger terminals upon arriving from a trip to Zambia has added impetus to the recent talk of a souring of relations between the two.

The president, who arrived at JKIA at 4pm on Saturday, discarded protocol and went straight to the international passenger terminals catching his deputy unawares. Ruto was accompanied by Kiambu Governor Ferdinand Waititu.

Dr Ruto, who was waiting at the Pavilion, immediately left for the city centre, after he was informed that the president had already disembarked from the plane and was inside the airport in a series of events that officials tried to dismiss as a ‘small deviation from the usual protocol.

The confusion
“The DP was a bit late to the airport hence the confusion. There was nothing sinister,” said a senior official who asked not to be named.

But multiple sources around the president said his decision not the result of an impromptu change of plan. The president, according to sources, was not keen to seen with the Kiambu governor who was being looked for by the police.

Mr Kenyatta is also said to have been unhappy with pronouncements the DP’s allies made the previous day at an event in Uasin Gishu that amounted to a direct attack on the ongoing war against corruption.

Speaking at the event, which was attended by Dr Ruto, Laikipia Woman Representative Kate Waruguru claimed corruption cases facing former Finance CS Henry Rotich was political and that the president had been misled into believing lies and propaganda from those around him.

“Today, we are looking for enough evidence on Arror and Kimwarer dams without which we are not going to accept the charges against Mr Rotich. We know there are 28 people who are being coerced to testify against him,” she claimed.

Ms Waruguru, who is also a staunch member of DP Ruto’s team Tanga Tanga, also took a swipe at Interior CS Fred Matiang’i for failing to come clean over controversial sale of public land to an individual – commonly known as the Ruaraka land saga.

“We summoned Matiang’i to the parliamentary committee on land to answer questions on his alleged involvement in the illegal sale of Ruaraka school land to an individual. My friend, Matiang’i knows what happened. There is someone who is not telling Uhuru the truth,” she added.

Ms Waruguru spoke two days after Kapseret MP Oscar Sudi dared Mr Kenyatta to leave office on grounds that he was running a failed administration he described as ‘the worst in the country’s history.’

“William Ruto let me tell you that your friendship with President Kenyatta is fake. Why sacrifice innocent people in the name of fighting corruption,” Mr Sudi posed.

The DPs allies stepped up the pressure on Saturday during a fundraiser for African Inland Churches in Njabini, Nyandarua County.

“We want to tell all those planning to bring a motion in parliament to bar you from contributing money to churches that they will not succeed,” Kiharu MP Ndindi Nyoro said, adding that Dr Ruto was headed to becoming president in 2022 despite the many obstacles being erected in his path.

“Murang’a people and the rest of Mt. Kenya are behind you,” he said.

Dr Ruto’s activities in Central Kenya appeared to fly in the face of the president’s latest efforts to rally his core Central Kenya support ahead of a planned tour of the region next month.

The public pushback during a week in which the Mr Kenyatta is said to have sent Cabinet Secretaries Joe Mucheru and Peter Munya on a mission to rally the region around his development agenda was seen as the clearest signal that the DP had chosen to take on his boss head-on.

Naivasha MP Jayne Kihara and Kikuyu’s Kimani Ichungwa are among the MPs said to have made pronouncements that riled the president.

Though Dr Ruto was measured in his responses to the MPs pronouncements in Uasin Gishu and Nyandarua, sources said his failure to countermand his allies did not go down well with the president.

And after almost 30 minutes at the airport, the president left for State House in what observers said helped avoid an uncomfortable meeting with his deputy.

How Mr Kenyatta will relate with his deputy in the coming days could offer an insight into how deep his displeasure with last week’s events was.