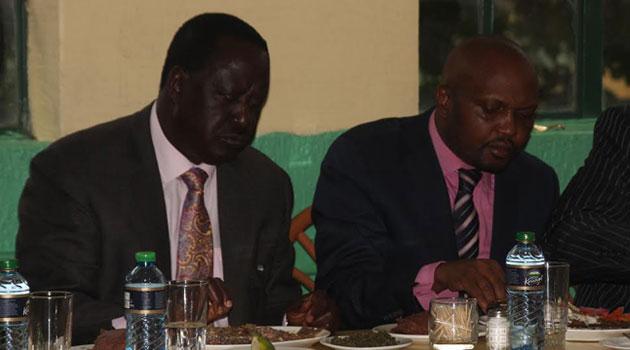 “Raila is an amazing man. I was against him before, but we are living in very funny times. The Odinga you are talking about is now our partner in building bridges and in the handshake,” Kuria revealed when Tony probed to know why he had stopped attacking Raila.

Kuria was speaking to Tony Gachoka on KTN News’ “Point blank” further revealed that Raila is a man who buries the hatchet and forgives easily.

“He does not hold grudges. In fact, I requested him to join me in enjoying another fish delicacy,” Kuria asserted, referring to the meal they shared on June 21, 2016, after Raila invited him to a lunch date.

The Jubilee MP also revealed that he looked up to Raila as a role model and idol.

“When I grow up I want to be like him,” Kuria opened up on his dream.

However, on DP William Ruto, Kuria unleashed harsh criticism claiming that the second in command was confused and did not understand the Jubilee agenda.

“For William Ruto, the alpha and omega is Jubilee Party, for Uhuru Kenyatta, it is beyond Jubilee to Kenyans. The DP needs to understand the president. You might be right but give yourself one chance to think that you are wrong,” Kuria ranted.

Kuria also hit hard on the DP’s 2022 ambitions, asserting himself as a strong competitor by declaring his presidential ambitions too.

“William Ruto is a friend, but on 2022 we’re not together. All of us are material for the presidency,” Kuria declared.