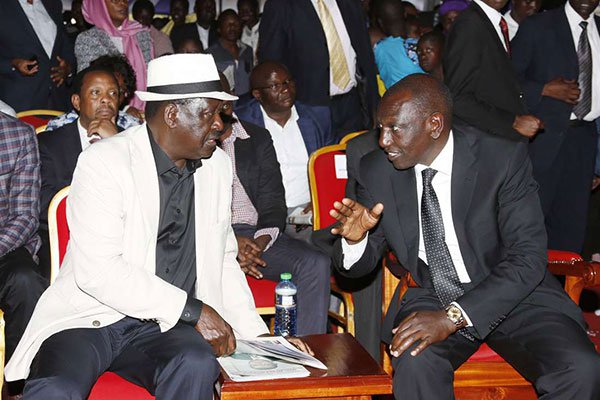 Opposition boss Raila Odinga has hit out at some of the Jubilee leaders saying that they were not happy with the Unity between him and President Uhuru Kenyatta because their handshake had opened doors for development in Nyanza region.

Speaking on Sunday when he attended farmer’s field day at his Bondo home, the ODM Leader accused Ruto’s Tanga-tanga side of Jubilee saying that the camp was jittered because Nyanza which had been left out for long was slowly starting to enjoy the fruits of the handshake.

Raila accused the Ruto led camp noting that through the handshake, stability and developments were on a higher gear in Kenya.

“Part of the agreement under the handshake was to ensure equality in terms of development and employment across the country. Some people inside Jubilee are now unhappy because Nyanza is enjoying these developments,” said Raila.

Concerning the escalating rate of corruption, Raila said together with President Uhuru, they will lead the country in putting to an end the rampant corruption and impunity. He said they will deal with poverty, illiteracy and poor health.

“I have been singing about Canaan. It’s not the vision of Raila alone. It is well represented in the National Anthem, We will get there as you can see” he stated.

Raila was in Nyanza region for the second time in the month of July where he assured the residents that the government of Uhuru had plans to revive collapsed industries in the region.

Among the industries to be revived in the region includes the collapsed Kisumu Cotton Mills (Kicomi) which Raila said Industrialisation Cabinet Secretary Peter Munya was soon going to inspect pending revival.

Raila had earlier on toured Kisumu Port which is currently undergoing a round-the-clock upgrade ahead of the planned August launch. Raila will be expected to host President Uhuru together with other four heads of States from East Africa during its official opening.

Raila who is seen as the potential competitor of Dr. William Ruto has over the last one year been taking on each other with Ruto accusing Raila of infiltrating into Jubilee party through the handshake to frustrate his 2022 bid.

Raila has overtime insisted that his decision to work closely with President Uhuru Kenyatta is not about 2022 succession politics but rather to booster developments and ensure that peace and good relationships prevail in the country.