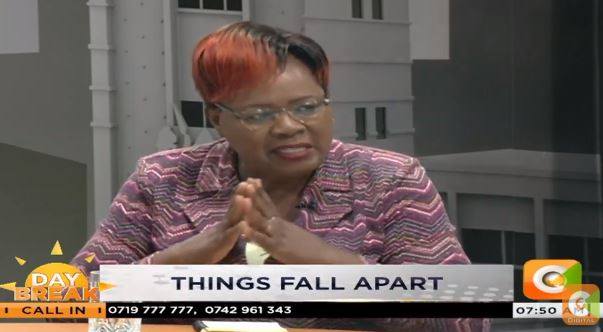 In a sensational claim, Kandara MP Alice Wahome alleged of a mid-night meeting between Members of Parliament opposed to Deputy President William Ruto.

In the claim that has since started to shape speculations on why police fiercely sought embattled Kiharu MP Ndindi Nyoro, Interior Permanent Secretary Dr Karanja Kibicho has once again been adversely mentioned.

While the media could not independently verify the claims, MP Wahome alleged that a high-profile meeting was conducted in Murang’a.

“I am aware of a meeting that occurred in Muranga last weekend, and it went up to 1 am…and it was led by a very senior businessman in Muranga, the PS is said to have been there…Kibicho, and other two people that I will disclose as we go along in this particular matter,” said Wahome.

She continued, “The discussion was how to stop Ruto (DP) from Presidency, and they discussed in terms of Muranga County [sic] that Mheshimiwa Ndindi Nyoro and Mheshimiwa Alice Wahome must be cut off.”

While the MP’s allegations are a matter that may be subject to investigations and proof should it proceed to the Courts of Law, similar allegations surfaced online in June.

La Mada
In the case, a letter believed to be from one of the Cabinet Secretaries seemed to suggest that a high-profile meeting had been convened at Lamada Hotel to discuss how to stop DP Ruto from ascending to Presidency come 2022.

In that instance, Trade CS Peter Munya, ICT CS Joe Mucheru and Health’s Sicily Kariuki were adversely mentioned. Also mentioned were Transport CS, James Macharia, and PS’s led by Dr Karanja KibIcho at the centre of it all.

Nyoro’s Woes
The embattled Kiharu MP was forced to spend part of the night in the cold seats at Inooro TV after he refused to leave the station, ostensibly to avoid arrest.

Several MPs allied to deputy president trooped to the station after news of his impending arrest surfaced online.

However, reports indicate that he managed to sneak out of the station past 11 pm.

Sunday, the MP gatecrashed a funds drive graced by former Starehe MP Maina Kamanda and a host of other Kieleweke MPs.

A scuffle would, later on, ensue after Nyoro sensationally claimed he was not recognised as the area MP.

His supporters were seen battling Police who had come to arrest him after the scuffle temporarily halted proceedings at the church service at Gitui Catholic Church, Kiharu.