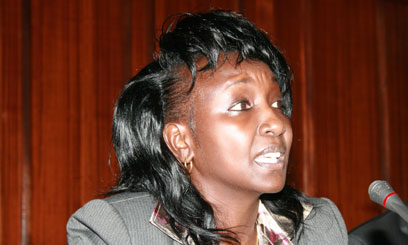 The woman representative seat could be scrapped if a proposed constitutional amendment sails through.

The Constitution of Kenya (Amendment) Bill, 2019 tabled by Uasin Gishu Woman Representative Gladys Boss Shollei in the National Assembly on Wednesday, seeks to create at least 179 positions for women in Parliament and county assemblies through elections and not party nominations.

Ms Shollei wants the 47 women MP slots abolished as well as the post-election gender top-ups in the Senate and county assemblies.

Currently, about 18 women are nominated in the Senate and in county assemblies, women make the majority of the over 800 nomination slots.

The Bill has 90 days to mature from the date of introduction, before the House Committee on Justice and Legal Affairs presents a report for debate.

The proposed amendment comes just days after the Independent Electoral and Boundaries Commission verified 1.2 million signatures collected by Thirdway Alliance Party for their Punguza Mizigo referendum drive that seeks to reduce the number of MPs in the National Assembly from 349 to 94.

Ms Shollei proposes to amend the Constitution to have 94 senators elected in the counties a man and woman elected in each devolved unit.

On top of this, the Bill is also proposing that political parties, based on their strength in the House, nominate six senators – four of whom shall represent persons with disabilities and two members representing the youth and elderly members of the society.

“Under the Bill of Rights in our Constitution, the right to equality is a human rights issue. What I am proposing is therefore not a women’s issue but a human rights issue,” Ms Shollei said noting that it is a requirement under the United Nations Covenant on Civil and Political Rights (UNCCPR).

The National Assembly has failed to pass legislation, four times, to implement the law that requires that not more than two-thirds of elective and appointive positions in public bodies shall be of the same gender.

In the National Assembly, the Shollei Bill seeks to amend Article 97 of the Constitution to increase the number of elected women MPs to at least 136 in the constituencies, some of which shall be mapped and designated as single-member constituencies for women MPs.

It further seeks to increase the number of persons to be nominated to the National Assembly from the current 12 to 22 and limit the nominative seats to persons with disability.

The proposed nominations contain a sunset clause of 10 years from the date of the first general election after the enforcement of the Act with a window of extension for further 10 years but through an Act of Parliament.

In attaining the numbers of women in the National Assembly, the Bill designates two adjacent constituencies in each county to be used as electoral units and the two shall form a single-member constituency for women MPs.

This means that, for the case of Nairobi that has 17 constituencies, 14 constituencies shall elect seven women MPs with the remaining three picking one woman MP.

At the counties, the Bill seeks to amend Article 177 to provide for the election of a woman MCA for at least every two wards for the purpose of gender parity.

The number of members of the National Assembly, the Senate and the county assemblies shall, however, remain the same as the number existing before the coming into force of the law for the purposes of their unexpired terms, the Bill states.

The Bill will require a referendum should it be passed in Parliament since its touches on devolution, a protected clause in the Constitution that can only be altered through a popular will.