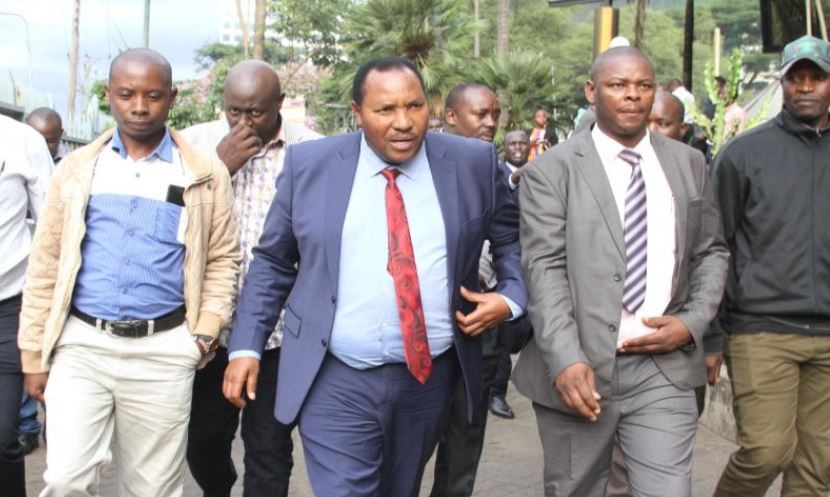 Besieged Kiambu Governor Ferdinand Waititu was Sunday arrested after he presented himself at the Ethics and Anti-Corruption Commission offices in Nairobi. There were unconfirmed reports that he spent Friday evening and Saturday at the official residency of DP Ruto in Karen, Nairobi.

His lawyer Kipchumba Karori said the governor had been “out of town since Friday evening” when news broke out he was wanted for prosecution.

“He arrived last (Saturday) evening and he has presented himself now to the authorities. There was confusion,” he said.

He arrived in one car accompanied by the lawyer. He did not have the trappings of power that he usually enjoys

Waititu’s wife and five others are now being sought after the Director of Public Prosecutions (DPP) ordered their arrest to face corruption charges.

Officials said they expect them to surrender.

An early Saturday morning planned raid by (EACC) detectives to arrest the suspects failed to bear fruit after the governor, his wife and the others went missing.

The detectives camped at the residences of the suspects from as early as 5.30am yesterday but left empty-handed hours later.

Mbarak directed them to present themselves at the Integrity Centre immediately.

Apart from Waititu and his wife, those being sought are M/S Testimony Enterprises Limited co-director Beth Wangeci, Chege’s wife and three other tender evaluation committee members, Zacharia Njenga Mbugua, Anselm Gachukia Wanjiku and Samuel Muigai Mugo. The county chief and his wife are directors of Bieneveu Delta Hotel Limited while the latter and daughter Monica Njeri Ndung’u, are directors of Saika Two Estate Developers Limited, both under probe.

However, Haji while giving his consent for immediate arrest and prosecution of the suspects, exonerated Waititu’s daughter. He noted that the governor’s daughter had no case to answer.

“We find that she was a sleeping director and not active in the affairs of the company. Her explanation is reasonable,” said Haji on Saturday. The suspects are to be charged in relation to abuse of office involving a tender worth Sh588 million and fraudulent acquisition of Sh221 million public property.

The inquiry relates to allegations of procurement of tender no CGK/RTPW/142/2017-18 for the upgrading of various gravel roads to bituminous surface in Kiambu County awarded to M/S Testimony Enterprises Limited.

The company was awarded the contract by the county government to provide services and supply goods by way of a request for proposal.

“A total of Sh74.2 million has so far been paid to the contractor. The company has therefore been paid Sh221.4 million, inclusive of the Sh147 million,” said the DPP.

The DPP said part of the funds were used by Saika Two Estate Developers Limited to purchase Bieneveu Delta Hotel Limited owned by Waititu and his wife.

The roads project covered Thika, Limuru, Gatundu North, Juja and Ruiru sub-counties, which was allegedly skewed in favour of the winning bidder with the assistance of the county officials.

They will appear in court on Monday.