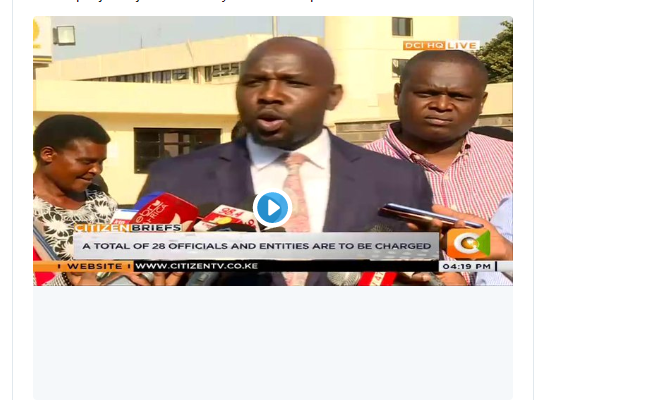 Senate majority leader Kipchumba Murkomen on the night of Sunday, September 8, rushed to Citizen TV offices to help a colleague who was evading police arrest.

Senator Murkomen was at the station’s Kilimani offices with other lawmakers, Alice Wahome and Kimani Ichungwa, to support the embattled Kiharu MP Ndindi Nyoro.

Nyoro was being sought by police after a confrontation between him and nominated MP Maina Kamanda ensued during a church service earlier that day.

The police had camped along Maalim Juma Road outside Citizen TV offices that evening, where they lay in wait for the MP who was scheduled for an interview on Inooro TV, a Royal Media Services-owned station.

The publication further detailed that the MP is said to have sneaked out a few minutes to midnight after barricading himself inside the station since 9 p.m.

Nyoro and Kamanda clashed during a service at Gitui Catholic Church in Kiharu causing chaos that disrupted the proceedings.

The lawmaker was later accused of assaulting a police officer who wanted to arrest him.

While at the station, Murkomen took a swipe at Inspector General of Police Hillary Mutyambai claiming that he should be held liable for arrests of politicians allied to Deputy President William Ruto.

Nyoro had earlier asked Citizen TV to provide him a couch to spend the night before surrendering to authorities the next morning.

“I pray that you will provide me with a chair, where I will sleep tonight, I am very innocent and the arrest is politics related.

“I will not be moved by anyone just because my parents are people who are not popular, I trust God but most importantly, today, I will sleep here,” a visibly shaken Nyoro requested.