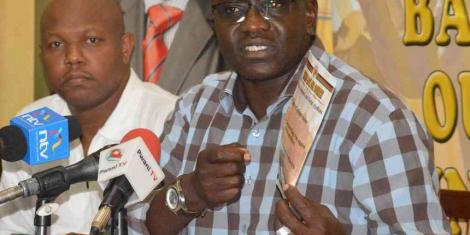 With only 20 days left for the bill to be debated on before being tabled in parliament, 39 counties are yet to consider the bill.

“I am actually glad the state machinery employed unorthodox ways including bribery to fight the Bill,” Aukot stated stressing that the Bill exposed a selfish political class that survived on the suffering of the majority poor.

Uhuru and Raila at a past function. Their championing of the rival Building Bridges Initiative has Thirdway Alliance leader Ekuru Aukot accusing them of instructing MCAs to steer clear of debating it.

Aukot rebuked Kenya’s top political class for what he termed selfishness and a disregard for the needs of the majority.

After visiting 23 counties, Aukot claimed that the MCAs he came in contact with confided in him that they were bribed to trash the Bill – an indirect accusation against President Kenyatta and Odinga.

The former presidential aspirant added that counties in Nyanza region had refused to consider the bill and that he was not going to ‘waste time’ touring the region.

“These politicians are only keen to retain power or create positions for themselves. These are political elites who use taxpayers’ money to bribe MCAs,” he spoke of Nyanza’s leaders.

If the bill was to be passed, each ward would receive at least Ksh100 million for development.

“Why would any MP, governor, senator and even president be opposed to more development money going to the villages?” Aukot posed.

Aukot could get a few consolatory wins. In Elgeyo Marakwet, where Deputy Speaker Christopher Chemosong said ward reps might unanimously pass the Bill.

“Punguza Mizigo has provisions that favor ordinary citizens. The Building Bridges Initiative is likely to propose the creation of more positions in Government and Kenyans don’t want that,” Chemosong observed.

Nandi County Speaker, Joshua Kiptoo was of the view that the push for constitutional reforms was political. “William (Deputy President William Ruto) has already caused damage to the BBI proposals and some counties would support Punguza Mizigo to oppose the BBI.”

Kericho County is likely to pass the bill during the October 8 scheduled debate, according to majority Leader Hezron Ng’etich. So is Turkana, after Speaker Ekitela Lokaale said the locals would support their own.

In Kilifi, Majority Leader Kadenge Mwathethe said most residents had endorsed the bill, adding that it was good for the country.

Taita Taveta County is likely to endorse the bill according to Majority Leader Jason Tuja because it would increase the share of revenue to counties from the current 15% to 35% if passed.

Lawyer Charles Kanjama stated that it was not yet over for the bill.“He (Aukot) can go to court and seek an extension of time and compel the county speakers to debate and vote for his bill.”

Kanjama added that Aukot could also seek a political solution by talking to politicians to back him up, or wait for it to collapse and start afresh…though the exercise of collecting signatures takes time and money.