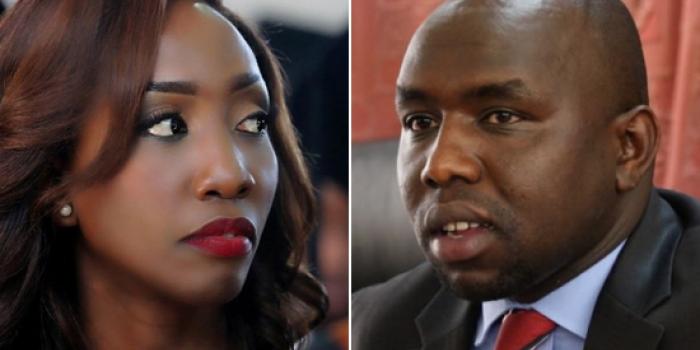 Citizen TV‘s Yvonne Okwara, on Thursday night, expressed her displeasure with Elgeyo Marakwet Senator, Kichumba Murkomen and a host of other leaders who attacked investigative authorities, over the arrest of embattled CS Henry Rotich, on Monday.

Shortly after the CS was nabbed, Murkomen rushed to DCI headquarters along Kiambu Road and dismissed the move as a PR gimmick, adding that arrest was politically motivated.

Giving her take on News Gang, Yvonne criticised the senator and others like him.

“No sooner do we hear of an arrest, investigation, prosecution, than the politics sets in. The lines are characteristically familiar.

“They want to finish us, my people are being targetted, and now the latest entrant into the rhetoric is it is about the 2022 succession politics.

“This rant is usually followed and often preceded by choreographed attacks on institutions, from the investigative agency, the courts and even the magistrates and judges preceding the cases.

“The contents of charge sheets are quickly converted into political gunpowder and presented as some poor innocent ethnic matter.

“This typical Kenyan tribal ritual at one point forced the DPP for breakdown, by tribe, the list of corruption-related arrests and investigations. Bizarre you may say but seems that was necessary.

“But then the Kimwarer and Arror list emerges and quite frankly, falls short of the warped expectation of regional balance. That provides some really inviting political fodder, especially the kind that feeds those roaming loose cannons.

“A list of criminal case suspects becomes a presidential succession factor but we must ask how.  It is part of the shocking lengths our politicians walk, to suit their selfish interests,” she noted.

The hard-hitting news anchor referred to the act of attacking investigators and the judicial process as blackmail.

“You have to hand it to the politicians though. They are capable of spectacular backflips of the kind that was displayed on Tuesday. When politicians who engaged the blackmail gear on Monday, turned up humble and constitution abiding before a court of law,” Yvonne highlighted.