When it rains, it pours and the floods may soon overwhelm the Rift Valley Regional Commissioner.

This follows insights that were drawn from the surprising revelations coming to the light in ongoing Mau trials currently before a three-judge bench at the Environment and Land Court.

One of the witnesses in the case, Johnson Talam who is a title-holder fighting against the evictions, made the claim that George Natembeya’s wife, Lilian Khaemba, owns a piece of land in the Mau Forest.

George Natembeya addresses journalists on destruction in the Mau Forest Complex in his office in Nakuru on September 13, 2019.

As per a report by the Daily Nation on February 18, 2020, Talam, the chairman of the Enkarooni Group Ranch, stated that the secretary of the group, Joseph Kimedo, had given part of his land to Natembeya through his wife in 2000.

“Ms Khaemba was given a parcel number 1,065 by Mapelo when Natembeya was still a divisional officer in Mulot, Narok County. He even told me to take care of his interest in the land when I once visited his office,” the court was told.

The revelations are surprising, not less because Natembeya was quite vocal in his support of the evictions.

His sentiments came across with unrivalled clarity on November 25, 2019, after the African Union’s Commission on Human and People’s Rights ruled that the Mau evictions be suspended.

“The decision is inconsequential; the government cannot implement it since there is no one left in the forest. The eviction stage was completed. We are in the process of planting trees in the complex,” he told the media.

However, the regional commissioner is not alone, another prominent government official has also been caught up in the saga.

The irony is in high gear as the official roped into the case is Cabinet Secretary for Environment, Keriako Tobiko.

Tobiko had been quoted starting in 2018, when he appeared before the National Assembly Environment Committee, stating that the titles in possession by some of the evictees were “just pieces of paper because they were issued fraudulently.”

Talam, in his statement, has however alleged that Tobiko helped some of the ranch owners acquire title deeds when he was a practising advocate.

The hearings challenging the Mau evictions began on February 17 and will run for four consecutive days.

The case was filed by Joseph Kimetto and 598 others after the first phase of evictions in 2018, who argued that the government did not issue them with eviction notices.

The government on its part through the Principal Secretary in the Ministry of Lands and Physical Planning, Nicholas Muraguri claimed that the 599 title deeds were not valid as they were obtained in violation of the law.

Since the evictions began, more than 3,300 people left the land and trees were planted in their place. 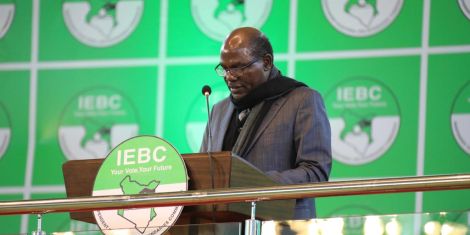