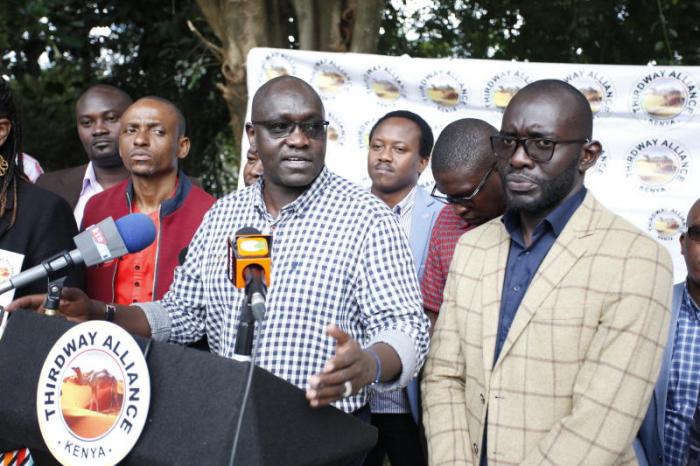 ODM Secretary General, Edwin Sifuna, might be forced to swallow his own words after he played down the Thirdway Alliance bid of collecting 1 million signatures to push for a referendum.

On October 19, 2018, in an interview on KBC‘s morning show, Good Morning Kenya, Sifuna stated that the Thirdway Alliance was just a nuisance and couldn’t manage to meet the bare minimum in their referendum push.

Sifuna had appeared on the show alongside Fredrick Okango, Secretary-General of the Thirdway Alliance Party and Daniel Kibet, who is a political analyst

He further maintained that its bid to collect the 1 million signatures required by IEBC to begin the process of a referendum was all in vain.

The vocal SG was quick to assure that he would resign from his position at ODM if the Ekuru Aukot-led party would manage to collect the signatures.

“I can guarantee you and I want to bet in front of this country, if this Thirdway Alliance is able to raise these signatures, I will resign as the secretary general of ODM,” Sifuna reiterated.

The ODM official further noted with extreme confidence that Aukot and his team were just wasting everyone’s time because Kenyans knew where to look for leadership.

The show host, Ram Aguko, promised to hold Sifuna to his word.

On Thursday afternoon, the IEBC confirmed that it had reviewed the signatures submitted by Aukot’s team and had approved 1,222,541 of them.

This sets the ball rolling for the election body to prepare for a possible referendum, as they submit the Punguza Mzigo proposal to the 47 county assemblies.

Once the 47 counties go through the proposals and approve them, they will be submitted to the National Assembly and eventually to the Senate, setting the ground for a national referendum if passed.

The IEBC estimates that a referendum will cost at least Ksh12 billion.

However, when commenting on the video on social media, Sifuna sarcastically denied having any knowledge of the video.

“It wasn’t me, I was misquoted, I don’t recall, I said re-sign not resign, I would rather die, I’ve never been on KBC and I don’t know who Third Way is,  Take your pick,” he noted.