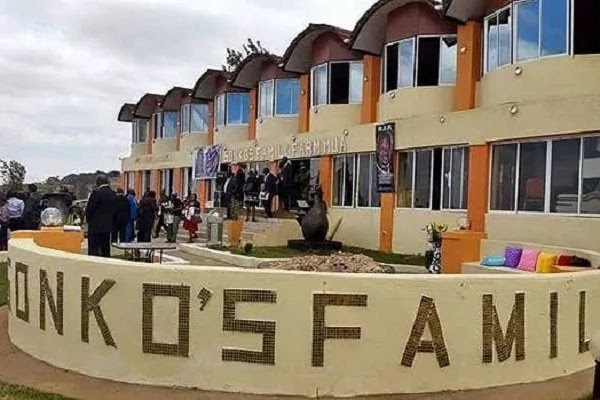 Flamboyant Nairobi Governor Mike Sonko’s larger-than-life persona cannot be depicted perfectly than the way he did it in his choice of shelter.

Located on Mua Hills, Machakos County, the governor’s mansion reportedly valued at Ksh150 million humbles those belonging to his neighbours with its elegance and magnificence.

Just like its owner, according to Daily Nation, the mansion spots a gold theme on its perimeter wall and has the name ‘Sonko’s Family Farm’ prominently embedded on its front.

So impactful was the construction of the house, built while Sonko was still Nairobi’s senator, that the road branching off Mombasa road to his home and Kaseve got tarmacked.

Approaching the home’s gate, three life-size sculptures of lions resting on the wall welcomes the guests in.

Inside the compound are a basketball court, an ostrich pen and a mausoleum of Sonko’s father Kioko Kivanguli.

The house itself is a castle of two floors with generous use of tinted glass for the walls and windows.

There is a swimming pool, a gym and a conference hall where the governor has hosted executives in the past within the compound.

Inside the house, the names of the family members are reportedly engraved on the floor.

There is a fully stocked bar in the mansion.

Below are more photos and a video of Sonko’s mansion: