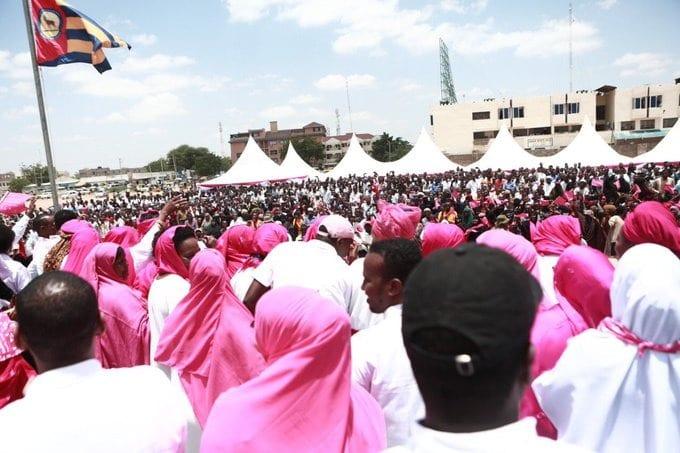 Anti-riot police on Saturday, September 28 rescued President Uhuru Kenyatta-allied women from an attempt by goons to thwart their meeting.

‘Team Embrace’ had visited Garissa town to call to an end to politicking that had been witnessed around the country.

As soon as they arrived in the area, a section of rowdy youths attempted to disrupt the meeting convened at Garissa Township primary school grounds.

However, prior reports indicated there were plans to from the onset, scuttle the meeting due to local politics of conflicting Garissa leaders, Governor Ali Korane and National Assembly Majority Leader Aden Duale, who is also the local MP.

The men in blue were then forced to intervene and disperse the youths who engaged them in running battles before the police contained the situation.

Vocal Likoni Member of Parliament (MP) Mishi Mboko affirmed that “Sisi tuko hapa, hatuna vita na mtu, lakini hatutishiki, hatubabaishwi (We are not here to fight with anyone, however, we are not scared of anybody).”

The group, that fashions itself as defenders of the March 2018 handshake between Uhuru and ODM leader Raila Odinga earlier on paid respect to Garissa University attack victims when they visited the institution.

The team, led by women leaders allied to the Building Bridges Initiative (BBI), was in Garissa and passed by the scene of the 2015 attack that left 147 students dead.

However, the presence of Shebesh in Embrace Kenya meetings has since sparked anger from ‘Inua Mama’, a lobby group of women leaders allied to Deputy President William Ruto.

Kandara MP Alice Wahome, declared that Shebesh should immediately tender her resignation because she was not working as a public servant should.