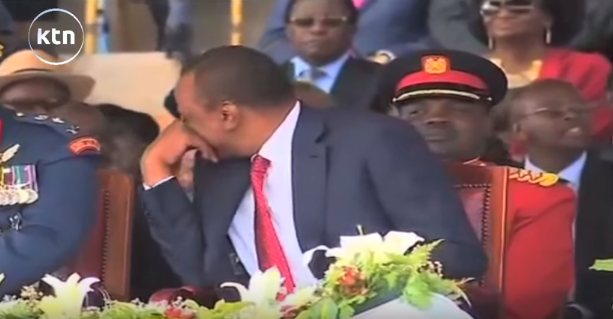 President Uhuru Kenyatta like most Presidents has many hidden talents that are unveiled in bits to the surprise of their countrymen.

In December 12, 2014, Uhuru proved that he too had a musical bone, after he was caught off camera singing to a popular Sauti Sol song, Sura Yako Muzuri Jamhuri day celebrations.

In the video the Head of State was caught unawares singing and nodding to the live performance by the renowned boy band before shyly looking away amid laughter.

Those seated behind him roared with laughter when they noticed the President’s reaction after he was caught unawares.

The group, that was among those who performed during the event at Nyayo Stadium, caused an uproar in the stadium with the public dancing along.

President Kenyatta, who has in the past invited the music group twice to State House, during his birthday and at a dinner event for UN Secretary General, seems to have grown fond of them and familiarized himself with their tunes

In a separate event in  2017, he seamless sang to a popular Kikuyu hymn ‘Ngoro yakwa’  translated as let my heart sing for you.

The President sang to the accompaniment of an acoustic guitar played by Man Nyari.

This was during an interview with Kameme FM, that broadcasted from Sagana State Lodge in Nyeri county.

At the time, he was touring Nyeri urging Central Kenya residents to register as voters in readiness for the August 8 general election.