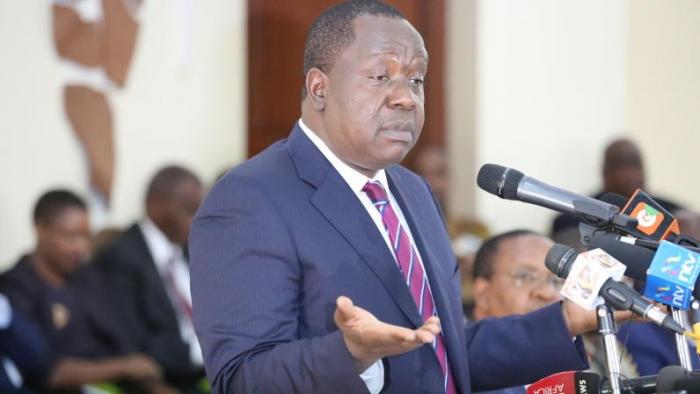 According to a report by Citizen TV, the three bodies bore strangulation marks and it was believed that they had been killed elsewhere and dumped in the area.

They were found just a kilometer away from Uhuru’s Itaweri home in Gatundu.

The revelation came barely 24 hours after Matiang’i had visited the area and promised to restructure its security structure accusing them of laxity.

The police believe that the deaths were connected to an armed gang that has been wreaking havoc in the area for the past one month.

The bodies were discovered by a group of pupils.

“The pupils so the bodies and thought that the victims were drunk. The older pupils are the ones who saw something was amiss with the bodies,” Julius Kariuki, a resident of Gatundu stated.

“We all looked at the dead bodies and confirmed that we did not know any of them,” corroborated James Rua.

With the latest discovery, total bodies killed by the unknown assailants comes to six.

The bodies were taken to City Mortuary for preservations as investigations into the bizarre killings continue.

While in Gatundu South, the CS had met the leaders and top security chiefs in the area where he assured them of enhanced security.

“We have accessed the situation and we have deployed measures to fix the issues we’ve noted. We are reorganising our security and national government administration in Kiambu with immediate effect,” he stated.