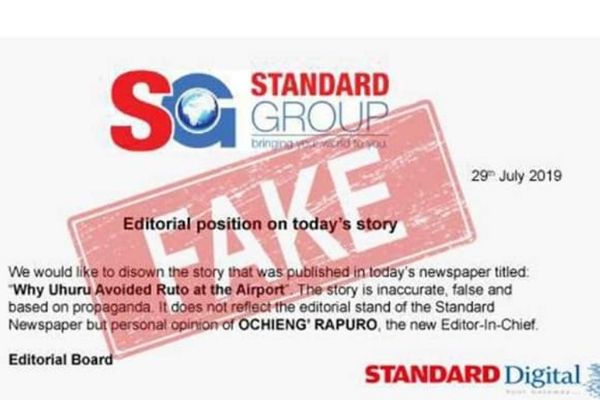 The Standard has dismissed an apology letter circulating on social media the better part of Monday terming it fake.

In the letter, the Mombasa Road-based media house allegedly apologised for a story that had been published on the Monday newspaper ‘Why Uhuru Avoided Ruto at the Airport’.

“We would like to disown the story that was published in today’s newspaper titled “Why Uhuru Avoided Ruto at the Airport”. The story is inaccurate, false and based on propaganda.

“It does not reflect the editorial stand of the Standard Newspaper but personal opinion of Ochieng’ Rapuro, the new Editor-in-Chief,” read the fake letter.

However, through their social media pages, the media house dismissed the letter as fake.

“Our attention has been drawn towards this letter circulating on various social media platforms with regards to a story done by The Standard.

“We urge our loyal audience to dismiss the letter as fake and support us in combating fake news,” the media house clarified.

On Monday, Deputy President, William Ruto, termed the story published on the cover of the paper as fake.

The article claimed that President Uhuru Kenyatta had jetted in from Zambia, on Saturday evening, and dodged his deputy, who was waiting to receive him at the JKIA Presidential Pavillion.

Taking to Twitter, DP Ruto dismissed the story and explained that he had not gone to receive President Kenyatta at the airport when he jetted in.

“I was nowhere near JKIA. I am not surprised that some media houses and their owners are this desperate. Tuwasamehe tu (Lets forgive them)!!” Ruto posted on Twitter.