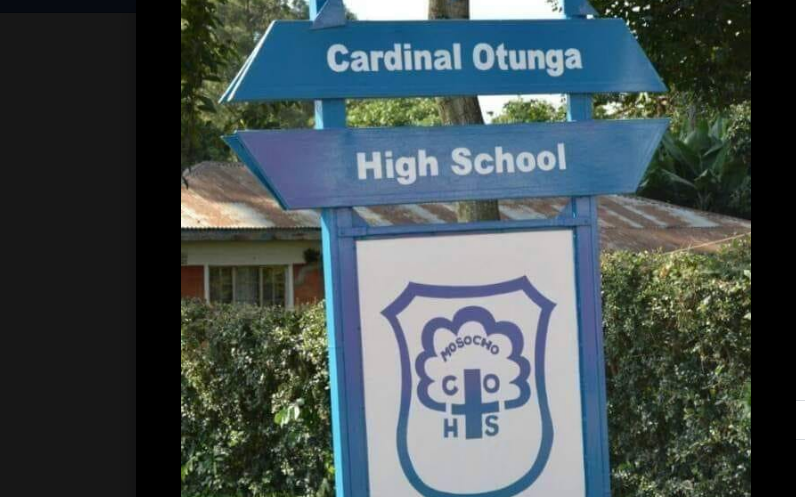 By Generali Osumo Jnr via fb

A short narration on my wall about one of the most prestigious academic institutions in history from Gusii, Cardinal Otunga Boys High School, Mosocho this morning has served as an eye opener to much rots at the back page of the institutions walls!

I get a text in my inbox on someone who wants me to share his experience on the similar story of molestation. What I got from him broke my heart. This is his narration:

“Hi Generali, my name is John (not his real name). I was admitted to Cardinal Otunga Mosocho on 13th of January 2012. I had all expectations that I have joined the best institution which I could Excell from since my brothers had gone through the same school and performed highly. That was never to be.

On my 1st week in school I started receiving some unique treatment from some form 3 boys. They never used to allow me to go and line up for food at the dining hall as the rest of my classmates. They served food for me and sometimes I had special meals not served in school, where they were getting the meals I don’t know. I never used to attend to manual works as the rest of of the form ones too. After a few days I came to realize that it’s not only me who was being put in such special treatment we were a number of us form ones.

One Saturday evening one of the form 3’s who had been treating me so well requested me to join him in a walk towards the farm. I agreed. When we went past the field off from the glare of everybody, he started touching me suggestively even going as far as touching my genitals. I was shocked and ran away from him.

My life in school was never the same again. I started receiving every kind of threats from prefects and everyone else. My special treatment stopped. One Sunday a prefect told me to go and clean his room as everyone else was rushing to the chapel for masses. So I had no option than to obey. As I was almost done the prefect came in and closed the door. He then ordered me to be quiet. Slowly he started caressing me and within no minute the unthinkable had been done on me!

He then threatened me not to speak to anyone about it or else he will make me expelled from school. He even offered me incentives like money and even new uniforms which I had no option but to take them. My life suddenly changed, in some few weeks to follow I was living under stress, I never spoke to anybody because I was ashamed of it anyway. Time for half term came and we went home. My parents noticed that I’d changed a lot. In the entire half term I used to close myself in my room and cry the whole day. My father tried to enquire what was happening but I never mentioned, the fear and shame in me couldn’t allow me to talk. At one time I was thinking of suicide.

After half term I went back to school and it continued as usual. The number of my senior school mates who were molesting me even increased. I even realized that it’s a normal thing now. But I was never comfortable about it. 1st term went, we came back in second term and it was the norm. What I realized is that those who were engaging in homosexuality were always living large. They were never broke at any given time and even used to sneak out of school to go and get drugs from outside.

Towards the end of 2nd term I decided that I wouldn’t keep quiet anymore. I decided to approach one of our priests at the chapel. After listening he cautioned me not to talk to anybody about it not even my parents. He told me he will investigate and make the vice stop. 1 week later I saw nothing. That is when I even realized that some of the homosexuals received so much protection from the teachers, non teaching staff and even the church leaders.

We closed in second term and went home. Without realizing I had now become an homosexual. During the holidays I attempted to molest one of my cousins at home unfortunately he reported me. I received a dogs beating from my dad and locked for 2 days in my room. This time nobody wanted to listen to me. I decided to commit suicide. I took excessive hospital drugs and lied there to die. Luckily one of my sisters came and raised alarm, I was rushed to the hospital for 1st aid and I survived.

After that I was taken in for guiding and counseling sessions where I decided to narrate the whole story to the counsellor. I was immediately put under medication and my parents advised never to take me back to Cardinal Otunga. 3rd term I was transferred to a day school near our home and never stepped foot in Cardinal Otunga. It was difficult for me to get out of the homosexual thoughts though but I struggled to cope. Even in my new school I could get attracted to my fellow male classmates but I struggled not to mess again.

Today, I’m in my forth year in one of the one of the best University in the country persuing Bio-chemistry. I thank God I managed to get out of that evil of homosexuality. I got touched by the post I just read on your timeline about my former school and I thought I should share my story to make the world know that these things are real and they are happening. Am happy I had an opportunity to share my story the world.