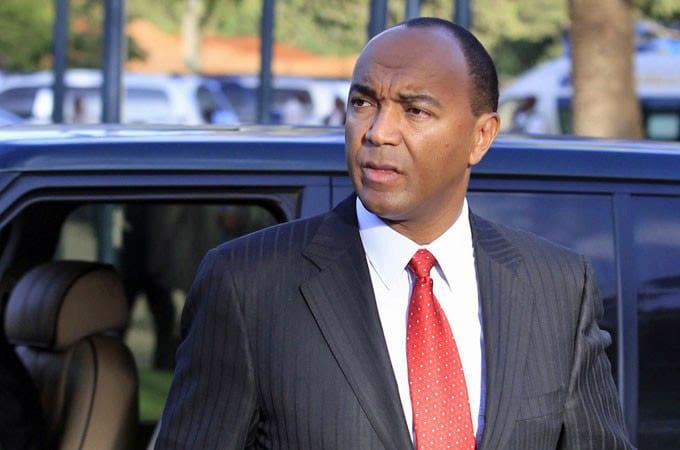 This took place at Kirwara in Gatanga, Murang’a County, during the funeral service of Rahab Wambui, Kenneth’s mother, who had passed on at Aga Khan University Hospital last week Thursday.

During the session, Raila cracked up the audience by greeting them in Kikuyu language saying “praise the Lord.”

“We have come to comfort the family of Rahab who brought up Gatanga’s white man,” he began amid laughter.

In his speech, Raila hailed the grieving Kenneth, selling his best qualities to the president and concluded by asking Uhuru to give him a job amidst claps and cheers from the audience.

“Peter Kenneth is a reasonable man, he conducts himself with decorum, he is organized and even the way he dresses up, makes him look like a white man,” he advertised.

“He also upholds transparency and as a result, Mr President, this man should be given a job,” he pressed.

He further reinforced his request by recalling instances he worked with Kenneth especially while he was Prime Minister.

Raila further comforted the grieving family disclosing that he understood the pain of losing a mother, and in the process shared his experience.

“It is painful to lose a mother, very painful, I lost my mother when I was locked up but I found out the moment it happened, because of a mother-son bond that we shared,” he reminisced.

“Which is why I understand why you were unable to read what you wrote about your mother,” added the former Prime Minister.

Raila concluded by disclosing how both of them are football fans and congratulated Harambee Stars for matches well played during the AFCON games.