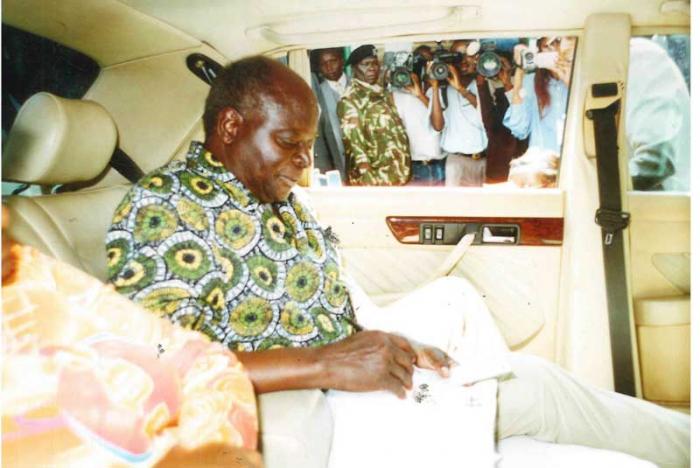 A man has cause for regret only when he sows and no one reaps, is a statement that fits ODM Party leader, Raila Odinga, in connection to the December 3, 2002 accident involving former President Mwai Kibaki.

The accident, which occurred at the Machakos junction, happened at the worst possible time, as Raila and Kibaki were on the final lap of their intense campaigns leading up to the General Election slated for December 27 the same year.

However, this was not Raila’s biggest regret, according to his autobiography, The Flames of Freedom.

His biggest regret was in fact his vigorous campaign on behalf of Kibaki, for the next 3 weeks, during which he fed the electorate with a ‘bunch of lies’.

Raila championed the remainder of the presidential campaign, leading up to their resounding win with 62 per cent of the votes, against then KANU presidential candidate, Uhuru Kenyatta.

“When Kibaki was hospitalised after his car accident in 2002, I had taken over his campaigns and made a lot of promises in his name,” an excerpt of his book revealed.

The opposition leader went on to narrate how he felt accountable to the people over all the promises he had made on the campaign trail, and how none of them saw the light of day.

“I was hard-pressed to explain why most key national appointments had gone to people from one region of the country,” Raila narrated, during his 2007 campaign trail.

“I now had to explain to the public the dishonest politics that led to NARC’s demise,” he added.

Raila, in his book, went on to disclose details of how Kibaki reneged on their deal to push for constitutional reforms, further increasing his deep sense of regret for peddling lies on behalf of Kibaki, albeit unknowingly.