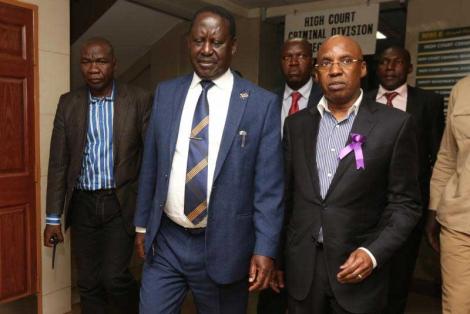 African Union (AU) Special Envoy for Infrastructure Raila Odinga on Wednesday, May 6, called for the creation of new dockets for ‘Africa Ministers’ within the African Union.

Explaining his thoughts, the Orange Democratic Movement (ODM) leader observed that little was done to follow up on continent-wide decisions made at annual AU summits, an called for a radical shift.

In an interview with South Africa’s SABC, Raila noted that if positions such as Africa Ministers for Health, Agriculture and other dockets existed, they would be able to push for the implementation of meaningful projects across the continent in line with the goals of the African Union.

“It’s time to come up with Africa’s Ministers for Health, Agriculture etc, so that decisions taken at AU summits don’t have to wait till the next Summit. They should be implemented by Africa Ministers,” he asserted.

Raila spoke on how the continent should react to the global Covid-19 pandemic, and called on African leaders to approach it as an opportunity to transform their countries.

He described the pandemic as the ‘Third World War’, urging African governments to prioritize local manufacturing and intra-Africa trade after the pandemic was dealt with.

“Information on Covid-19 was not properly shared. Even at the last AU meeting in February, Covid-19 was not an issue because the information was just not there. However, Africa has responded pretty well to the disease. We are witnessing a Third World War without bombs. The effects will be far-reaching.

“The entire world has come to a standstill. All African economies are going to be hit terribly hard, which is why we need to start thinking of the post-Covid-19 era. Africa is going to be left on its own.

“We have tended to rely on the external world for trade. That is not possible now and it won’t be possible for a long time. We will have to look at intra-Africa trade,” he noted.

Raila observed that for intra-African trade to grow, the continent needed to work on building transport infrastructure that connects various nations. He also noted the need for strong regulation and laws guiding intra-Africa trade.

The former prime minister also urged African countries to push for debt write-offs during the pandemic.

He advised them to re-structure their economies while focusing on innovation, reiterating that it was no longer viable to turn to the West or China to fulfil local needs.

“I want to appeal to African leaders to take this as an opportunity to get Africa out of poverty. Korea and China did it between 1970s and today. This must be Africa’s chance,” he urged.

Raila also urged Africans in various countries not to disregard precautionary measures due to the lower number of Covid-19 cases as compared to Europe or the United States, stating that a lower testing capacity was likely responsible for the figures.

“It’s time to be cautious and careful. There is nothing to celebrate. Let our people know there is danger around the corner. Our numbers may be fewer because we are testing fewer people,” he noted.