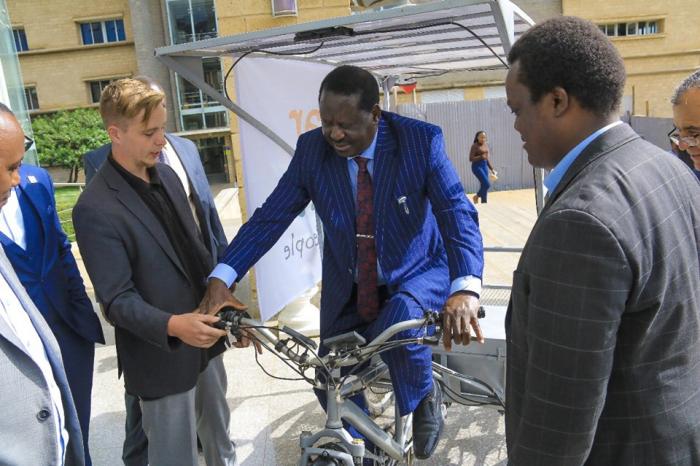 AU Envoy, Raila Odinga, on Thursday, impressed a crowd when he flaunted his cycling skillings.

To the awe of many, Odinga took on the challenge and climbed on a three-wheeled tricycle referred to as e-cycle.

The e-cycle is a solar-powered invention by Strathmore University’s Energy Research Centre in Nairobi City.

Odinga was at the institution for the launch of Powering Jobs Census Report findings.

Donned in a blue striped suit and flowered tie neatly clipped to his shirt, Odinga still climbed on the tricycle disapproving many.

Raila, who had gone to launch another project in Kiambu, also addressed issues of government compensation.

In his speech, he cracked up his audience by stating how Kenyans grab any available opportunities to milk the government of compensation money.

“Someone complains oh, I had a banana plant here, another, I had kept a beehive I also need compensation,” he joked.

The crowd roared with laughter, clearly relating to what the former Prime Minister was putting across.