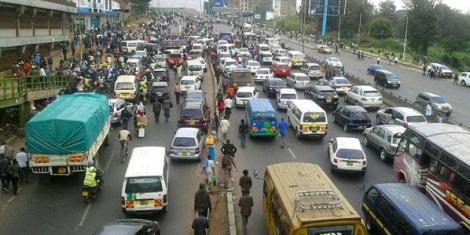 National Transport Safety Authority (NTSA) has suspended 9 matatu SACCOs in Nairobi according to a press release on Monday, September 30.

NTSA has suspended City Tram, a Sacco that operates between Nairobi town through Eastlands including Umoja, Buruburu and Kangundo road routes.

Mwamba Sacco that plies the Jogoo road route passing through Komarock and Buruburu has also been suspended.

MGN Sacco that goes through Mathare-North,Ngara and Gikomba has also been suspended by the authority.

According to the Director-General Francis Meja, the suspension was due to the fact that the Saccos had failed to comply with what NTSA had requested.

“I can confirm that the suspension is in effect as per the press release,” Meja assured when he spoke to kenyagist.com.

The 9 Saccos were suspended for not complying with Section 5(1) of the National Transport Safety Authority.

The provisions for operations of a Public Service Vehicle (PSVs) 2014 require that a Sacco have at least 30 serviceable vehicles.

Meja asked members of the public to avoid boarding these matatus that were listed as facing suspension.

In December 2018, NTSA had suspended 11 PSVs over traffic violations.

The operators had violated the night travel ban that had been directed by NTSA citing the majority of accidents happened during that time.