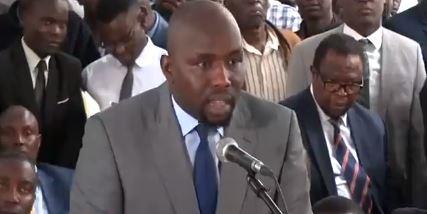 On Tuesday, Elgeyo Marakwet Senator, Kipchumba Murkomen, passionately pleaded with a Milimani Law Courts judge in a bid to secure bonds for Treasury CS, Henry Rotich, and other government officials who were arraigned over the Kimwarer and Arror dam scandals.

Murkomen, a lawyer by profession, was part of the defence team at Milimani Courts.

“The accused persons have diligently served the public; they have given many hours, just like yourself your honour, to public service. It’s not possible to say they are not patriotic enough be afforded an opportunity for a bond,” Murkomen wooed the judge, in a bid to convince him to release the accused on bail.

The CS earlier on pleaded not guilty to charges that were read against him.

He issued tough conditions under which the CS and other accused may be granted bail.

“A bail should only be offered if the accused are willing to surrender all their passports and all their travelling documents to this court because some have multiple documents. Two, if they are willing to keep off from their places of work.

Taib praised the DPP Haji for being meticulous, thorough and ensuring that he has put together a case that will convince this court to return convictions against the accused persons.

The CS, alongside his Principal Secretary, Kamau Thugge, as well as the Chief Executive Officer of NEMA,  Geoffrey Wahungu, presented themselves before the DCI after their arrest was ordered and were arraigned in court on Tuesday.

Here is the video courtesy of Citizen TV.