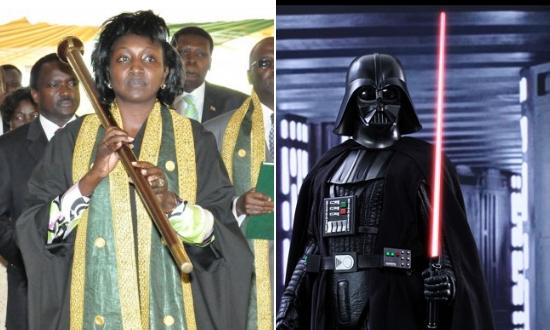 Uasin Gishu Woman Representative, Glady Shollei, on Wednesday evening, revealed that she was nicknamed after a movie villain.

Speaking to Citizen TV‘s Jeff Koinange on JKLive, Shollei stated that her former colleagues at the Judiciary called her Darth Vader, a character from Star Wars movie.

The county MP was giving examples of powerful women, who had been christened negative names to smear their character.

“If you are a powerful man you’re likeable, if you’re a powerful and successful woman, chances are that you’re not likeable.

“There was research also done, a study of women leaders in the world. There was a negative name called of them, by the press.

“Indira Gandhi was referred to by President Nixon as the old witch and Margaret Thatcher had a different name, Attila the Hen.

“I was at the Judiciary and I was called Darth Vader. So you can see, what happens is that, when women see that they become afraid,” Shollei.

Former Nairobi County Assembly Speaker, Beatrice Elachi, who was also in the interview stated that It is very rare to find women who go in office for greed; men in this country get into office for what is in that office…the greed!

On her part, Nominated MP Jennifer Shamalla spoke her mind that “Men are always out there carving/ bargaining space for themselves. These kinds of women movements (Inua Mama & Embrace) empower you to create that space.”