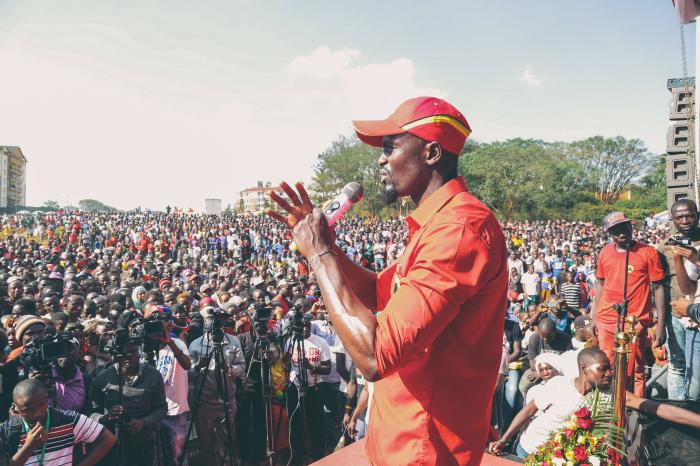 Jubilee Party’s candidate in the upcoming parliamentary by-election was the talk of the town on Sunday, September 29, as he splurged on a piece of artwork in Kibra.

Accompanied by nominated senator Millicent Omanga, Dagoretti South Member of Parliament John Kiarie – who played the role of the master of ceremony and several other Jubilee party leaders, Mariga made his way into the heart of the constituency he hopes to represent in parliament, and left many in awe as he splashed some cash around on a drawing.

Kiarie (alias KJ), spotted a young boy holding up a hand-drawn painting of Mariga, squeezed in between the thousands of Kibra residents who had thronged the venue to catch a glimpse of the legendary footballer.

The young artist was brought to the stage by security personnel and KJ asked him to hold up his painting for everyone present to see.

The Dagoretti South legislator – known for promoting artists -after making his name in the arts field as well, bought the painting as a gift for Mariga.

The visibly impressed Mariga then stepped up to the front of the podium and added Ksh 50,000 to the price, going on to embrace the young artist, with the crowd cheering on.

By the time the young boy made his way off the stage, he was Ksh 105,000 richer, with senator Omanga splashing out Ksh 20,000 and several other leaders as well, in solidarity with their party’s candidate.

Here’s the video of Mariga’s eventful day in Kibra: