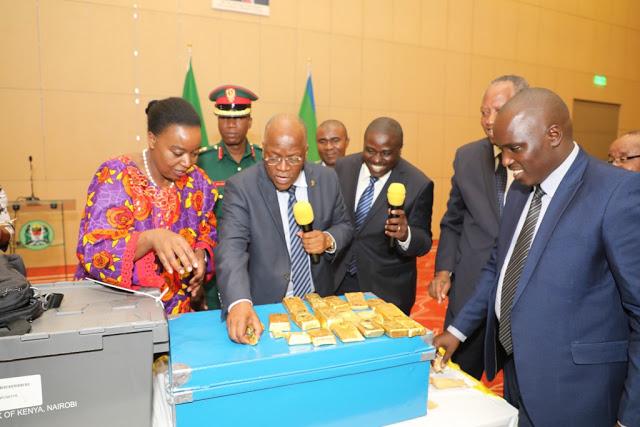 The handing over took place at Jakaya Kikwete Hall, at State House, Dar es Salaam with Magufuli praising the Kenyan security forces for seizing the package that was destined for Dubai.

“Napongeza DPP, and all the law enforcement officers in Kenya for the job well done,” he began.

Magufuli however, steered away from his written speech when he got to a section where he acknowledged the Tanzanian Security officers efforts.

(This gold was illegally transported from Mwanza Airport through Kilimanjaro International Airport and it is only when it got to Nairobi that it was nabbed. Therefore, to be congratulated here are the Kenyan authorities)” he conveyed.

Addressing the Tanzanian security heads, the head of state maintained that he would not spare them in front of the guests and the public

“When this consignment was being transported, what were our officers doing? were they also assisting the criminal or did they facilitate for him to take the gold? and how many other gold consignments have been illegally transported,” Magufuli posed.

He highlighted that the incident had exposed lapses in the Tanzanian security forces and was embarrassing to the country.

The president disclosed that he would personally write a letter to the Kenyan security officers thanking them on behalf of all Tanzanians.

“We shall see how to reward those officers who helped nabbed the consignment,” he added.

It is not yet clear the actual value of the gold returned but initial estimates put it at Ksh100 million.