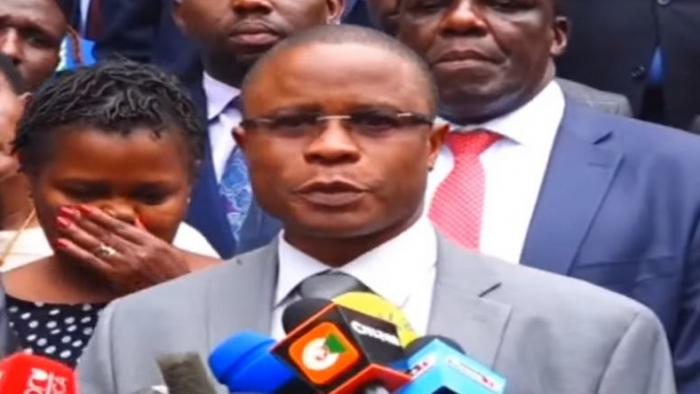 The late Bomet Governor’s widower, Edwin Obonyo, bravely battled his emotions, and sent out a short statement following the passing of his wife, on Monday afternoon.

Speaking outside Lee Funeral Home, where the body of his late wife was moved, he urged that the media to pull back in order to give them space to mourn.

“I humbly ask that you grant us some space to mourn her, it has barely been a few hours since her demise,” he asserted.

He went on to urge the rest of the family and loved ones to remain strong during the mourning period.

“We need to be strong for her, as she was always strong, even during her time of illness,” he disclosed.

Obonyo thanked President Uhuru Kenyatta, DP William Ruto (who was right by his side at the funeral home), the residents of Bomet and Sotik, for their unflinching support for the late governor.

Laboso’s passing came barely two weeks after she silently jetted back to the country on July 14, 2019, following a medical trip to India and the United Kingdom.

Numerous leaders joined the widower in mourning, with DP Ruto describing the late Bomet governor as a remarkable woman who rose against all odds.

On his part, President Uhuru praised her for being an epitome of women leadership in the country.

The late Laboso was one of the three female governors elected in the country, the others being Kirinyaga’s Anne Waiguru and Kitui’s Charity Ngilu.