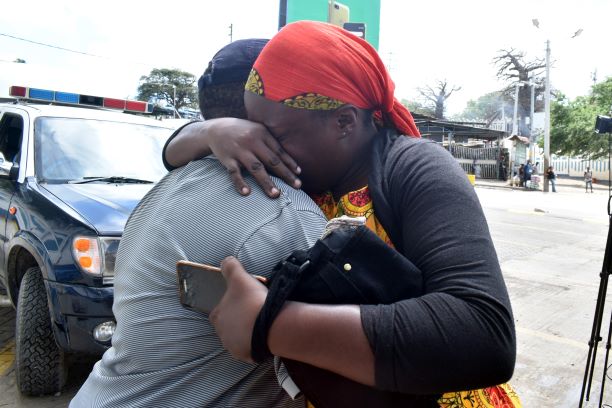 The family of the victims of the ferry tragedy has allegedly been forced to dig into their pockets to pay up private divers to help in retrieving the bodies of their loved ones from the Indian Ocean.

K24 reported on Tuesday, October 1, that Mariam Kigenda’s family had paid Ksh100,000 to a private company identified as the Kenya Rescue Divers to take over from where, they stated, the government had failed.

K24 further claimed that the family reached the decision after the government suspended the operations for the third time with a promise to resume on Wednesday morning.

The family was reported to have been exasperated by the decision to suspend the rescue operation, prompting them to take matters into their own hands.

Earlier on Tuesday morning, the Kigenda family had blamed the government for the fate that befell their loved ones for failing to act promptly when the accident occurred.

Reports had indicated that the vehicle stayed afloat for close to twenty minutes before sinking, with onlookers looking on helplessly.

The family had also complained that the sluggish process of retrieving the bodies of Mariam and her four-year-old daughter Amanda Muthe was only filling them with anxiety and distress.

“Nothing is going on. No one seems to care about my sister and niece. There was no one to save her life and nobody wants to help retrieve the bodies,” a relative had lamented on Tuesday morning.

Another family member had also complained about the government’s continued silence which, she claimed, left them completely in the dark about the affairs of their loved ones.

“The family has not received a word from the navy [nor has] Kenya Ferry Services even taken the decision to pay local divers to look for the bodies of Kigenda and her daughter,” she had lamented.

Bakari Gowa, the MD of the Kenya Ferry Services, broke the silence by informing the nation that search and rescue teams from Kenya Navy, KPA, Kenya Fisheries Research Institute & Private Contracted Divers had located the position of the vehicle wreckage approximately 173 feet below the water surface.