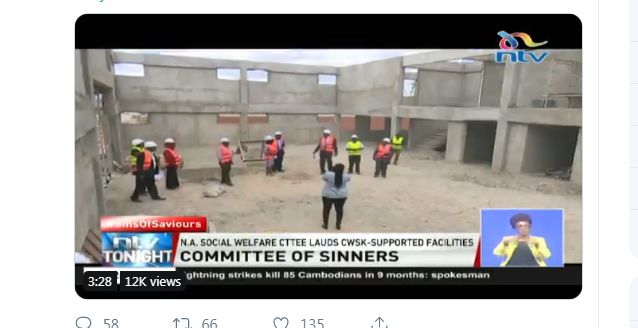 NTV investigates conducted an expose after it received damning evidence pointing to outright embezzlement of public funds at the expense of the children.
Kenyans had different reactions;

#AmKenyan Greed does turn humans into devils. These children do not deserve the torture they are being put through just so a select few can make millions off them and us as taxpayers!
Sickening! @ntvkenya@MarkMasai #SinsOfSaviours#STOPTheseTHIEVES

When Cain killed his young defenseless brother, he imagined no one saw it. But God saw it and said, ‘ “The voice of your brother’s blood cries out to Me.” The cries of those children will not go unanswered. #SinsOfSaviours @ntvkenya

They should do a life audit for this witch “Irene Mureithi” and return everything she has stolen from the government #SinsOfSaviours pic.twitter.com/WhcmNEax8C

From what I see from those drugs, It seems that child Welfare association’s Head is a member of superlife & uses the kids as an opportunity to make profits by bringing them for ‘Treatment’ at that facility. Irene Mureithi is a very evil woman where is Baby Kiano? #SinsOfSaviours

The ramp on the ferry where we lost 2lives was down Instead of being up due to negligence n still someone is enjoying his salary, Irene Mureithi should also be left alone to enjoy…
Let them fill their bellies n eat,but one day watatapika Kila kitu!
KARMA!#SinsOfSaviours pic.twitter.com/WcA01p0N9a

I squarely Blame The Pulpit in the Land over such misfortunes as #SinsOfSaviours. I am sure those involved in these acts sits under teaching. If that teaching is perverted then #SinsOfSaviours becomes the fruit.
Perverted Society. Rotten Society. Corrupted Society

I still insist that kenya is a walking CRIMINAL ENTERPRISE just by the feature aired on Ntv with a tag #SinsOfSaviours,…..

The greed in this country mahhn!! Azin it’s too much, sooo much it’s heartbreaking ????, funny enough nothing will be done to her. #SinsOfSaviours pic.twitter.com/kFDSXReSkQ

So she’ll be summoned
Appears before a judge
Given a bond
Life goes on…. ????????????#SinsOfSaviours pic.twitter.com/mGYpXARrk4

Irene mureithi of child welfare is as creepy as they come….never seen a heartless woman like her……juggling the kids health with profits.#SinsOfSaviours

Child Welfare Society of Kenya is really messed/fucked up. I remember they went to court to prevent @ntvkenya from airing #SinsOfSaviours

All the officials in that organization starting with Irene Mureithi should be sued and charged.
#