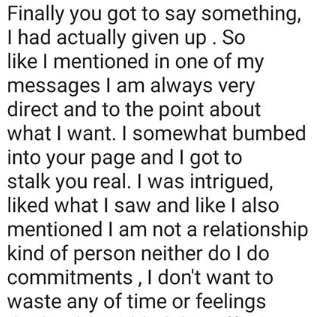 Radio presenter Kamene Goro has scorned at an offer made to her by a man who claimed to be an admirer of hers.

Taking to her Instagram on Thursday, she exposed the direct message sent to her by the stranger, whose identity she didn’t want to reveal.

The screenshot of the message she posted was of the man in question requesting to have casual relations with her and was willing to part. with at much Ksh100 million.

kenyagist.com tried to establish the authenticity of the presenter’s claims by posing a question about the stalker.

“It doesn’t matter if he could afford it or not, I don’t think it’s something that should be happening,” she responded.

“Ladies, let me tell you, anything any man is offering you in exchange for your body, Father God will give you ten times more from your work!” she posted.

“I Promise You!! Refuse! Refuse! Refuse! Mungu (God) is working so hard to make your dreams come true, you don’t need to spread your legs for you to get the pot of gold at the end of the rainbow,” she added.

Speaking to kenyagist.com the sassy radio queen explained that she was trying to show ladies that one could make it big without using underhand means.

“There are so many young people, girls and boys who look up to me and the fact that it happened to me, you can only imagine how much money is being offered to younger people.

“We need to address what is making young men and women want to make those trades,” she spoke.