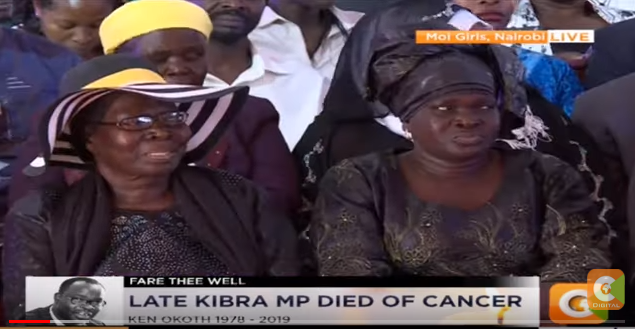 Nairobi Governor, Mike Sonko, has distinguished himself as an open leader who is willing to go to any lengths to give his side of a story.

This character manifested during the memorial service of the late Kibra MP, Ken Okoth, on Thursday, when he took mourners by surprise to blow the lid on the legislator’s alleged secret family.

During Sonko’s outburst, the cameraman decided to shift attention from the governor to capture how some of the mourners were consuming his speech.

At one point, Ken Okoth’s mother who had denounced the secret affair earlier in the week was caught on camera smiling with the woman next to her pursing her lips giving Sonko a side-eye.

At another stage during the address, Okoth’s wife Monica clasped her chin looking around.

Ken’s brother Imran was seated next to her also smiling as the crowd cheered Sonko on.

The governor would take calculated poses to read the mood of the mourners before proceeding.

When the county boss stated that he too had two wives, the camera shifted to former Prime Minister Raila Odinga to capture him having a light moment with his wife Mama Ida and ODM Chairman John Mbadi.

Former Vice President Kalonzo Musyoka, who was also in the frame could only laugh and stare.

When the Wiper leader stood to speak, he urged Odinga to help mediate the dispute between Okoth’s wife and the woman who claimed to have had an affair with the MP.

The former PM promised to ensure the deceased’s will would be implemented according to his wishes.