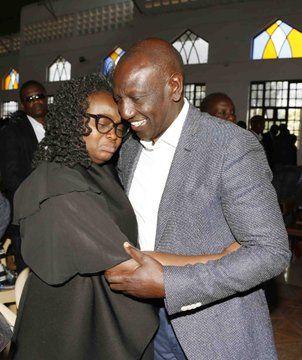 Deputy President William Ruto on Friday, October 4, promised to support the family of his aide who succumbed to injuries sustained during a car accident.

The DP showered the late Anthony Kariuki Macharia with praises stating that he would change the dynamics of the engagements he was involved in with his placid disposition and intellect.

“In any assignment, he was involved, you knew everything would be better. He was simply inimitable,” Ruto stated.

The DP who was accompanied by Meru Senator Mithika Linturi, Mathira MP Rigathi Gachagua, and  Buuri MP Mugambi Rindikiri was speaking during the funeral service at PCEA, Ngundu Church in Kamulu, Machakos County.

He further stated his regret in losing Macharia, who he termed as a valued and professional worker.

“Anthony Kariuki was sharp, dependable, industrious, committed, creative and full of positive attitude who made priceless contributions to my office,” the DP added.

Until his demise, Kariuki was the Deputy Director of Communications at the Office of the Deputy President.

Before moving to the DP’s office he worked at the National Media Group as the Digital Editor and at Plan International East and Southern Africa as the social and web editor.

Others who eulogised Kariuki included David Mugonyi who is currently the Communication Secretary at the Ofice of the Deputy President.

“He was ever fit to provide counsel and perspective on media and communication issues. Anthony changed the dynamic wherever he was,” revealed Mugonyi.