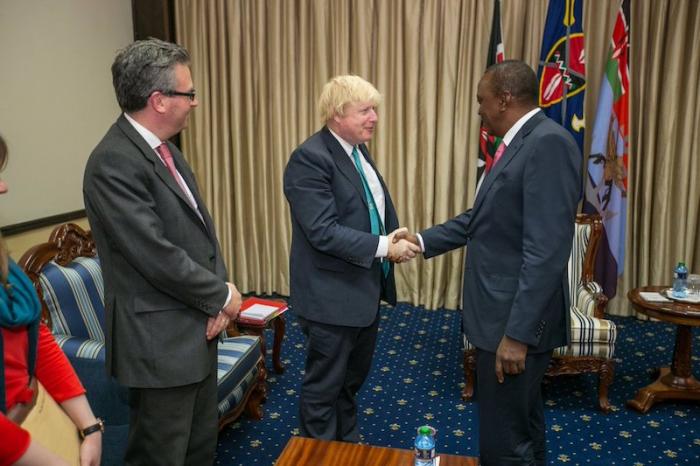 It became a field day for international media websites which published endless articles about Uhuru’s gaffe.

When asked about an agreement to allow stolen funds in Britain to be returned to Kenya, to fund health, education and other projects, President Kenyatta tried to remind dignitaries and the press of the former foreign secretary’s visit to the country but stumbled over his name.

“Last year if you recall the Foreign Secretary then Boris…Boris…Boris Johnson…the bicycle guy…Boris Johnson was here with ambulances,” Kenyatta spoke.

Uhuru referred to Boris as the bicycle guy because the incoming PM was known for riding to work.

Johnson was elected as the new Prime Minister of UK on Thursday, and will take over from Theresa May who resigned.

He is expected to be confirmed as PM on Wednesday, when his predecessor formally tenders her resignation to Queen Elizabeth II.

The new Conservative Party leader has a history of gaffes involving Kenya and Africa, having once attacked President Barack Obama, claiming that the “part-Kenyan president” had an “ancestral dislike of the British Empire”.

According to Nation, while still the Foreign Secretary, Johnson took time in a visit to Kenya in 2017 to reminisce on his earliest memories of Nairobi.

He pointed at the Kenyatta International Convention Centre and recalled standing there as a little boy.

“I first came to Nairobi when I was a little boy and I recall standing in a tall building over there and looking at Jomo Kenyatta,” he said.

“There has been progress and extraordinary success of Kenya today. It is really rather a moving thing. But it’s also great to see that the partnership between the UK and Kenya is robust and flourishing,” he added.