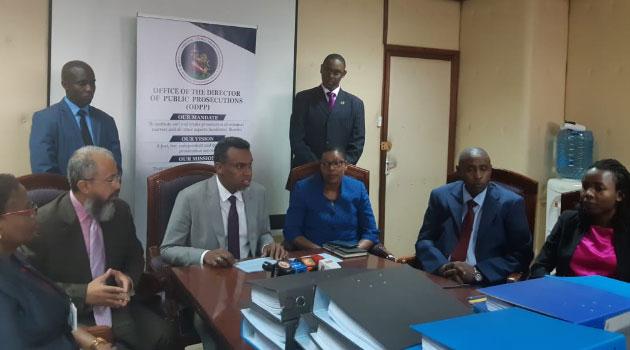 The arrest of Treasury CS, Henry Rotich, on Monday by the DCI made history in the country as he became the first sitting cabinet secretary to be arrested for corruption.

Rotich was among 28 people that the DPP had recommended for prosecution over the Arror and Kimwarer dams scandal.

This information was first revealed by KTN News when they took to Twitter and wrote, “Rotich becomes the first CS to be arrested in connection to corruption while still in office.”

Most of the cabinet members in the past were either forced to resign or replaced before they were arrested and consequently charged.

In May 2019, former Sports CS, Richard Echesa, was arrested in connection to the brutal murders that were witnessed in Matungu area of Kakamega County.

The Echesa was arrested just a few months after President Uhuru Kenyatta fired him from the cabinet.

Another Ex-sports CS who found himself in the dock after being removed from the cabinet was Hassan Wario.

Wario was arrested in connection with the Rio Olympics of 2016 where the CS, together with National Olympic Committee of Kenya (NOCK) officials, were accused of misappropriation of public funds.

When former Finance Minister, Amos Kimuya, was impeached by the National Assembly after the infamous ‘I’d rather die than resign’ statement, anti-graft detectives went after him on charges of abuse of power during his tenure as the minister for lands.

Another minister of former President Mwai Kibaki’s regime who had a warrant of arrest issued against him was the late David Mwiraria.

The warrant against Mwiraria was issued after the former finance minister failed to appear in court to answer to charges over his roles in the Ksh10 billion Anglo Leasing scandal.

Despite all these arrests, the only former minister who cooled his heels behind bars was Stanley Oloitiptip, who, in 1984, was jailed for 12 months at Kamiti Maximum Security Prison for failing to pay taxes on a hotel he owned in Loitokitok, then known as Kajiado district.