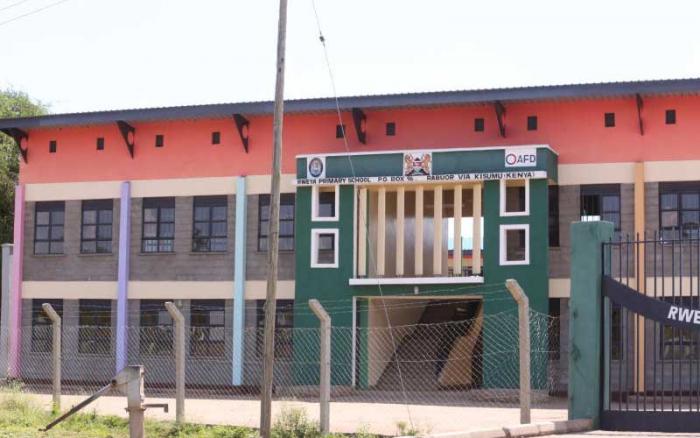 More than 400 pupils of Rweya Primary School have been locked out of the institution 16 months after the ultra-modern centre was put up at a cost of Ksh99 million.

The pupils have been learning in a temporary structure constructed opposite their new school since 2015 and were clueless about whether they’d move into the modern institution or not.

Rweya Primary School is one of the beneficiaries of a Ksh4.5 billion Kisumu urban project funded through a loan to the Kenyan government by the French Development Agency.

On October 2, 2018, concerned parents accused Governor Anyang’ Nyong’o’s administration of sidelining them in the management of the newly built school that is now being taken over by overgrown weeds.

They protested fruitless promises about the opening of the new centre, noting that their children were learning in unbearable conditions in the cramped temporary structures.

“In the last meeting we attended, workers at the site warned us against entering the compound. They told us to wait for the day they would hand over the keys to us. We are still waiting,” Joseph Oguya, a parent and a member of the school’s management board stated.

“The temporary classrooms measure about 10 square feet. There are classes with more than 50 pupils. This congestion is not only bad for the health of the pupils but also not conducive for teaching and learning,” Joseph reported.

Another parent claimed that the supervisors of the construction works were clueless about why the school was uncopied to date.

Other schools that were constructed at the same time as Rweya are already occupied by pupils.

As Rweya Primary School remains unoccupied to the detriment of the pupils, the contractor and the management of Kisumu City Council are locked in blame games.