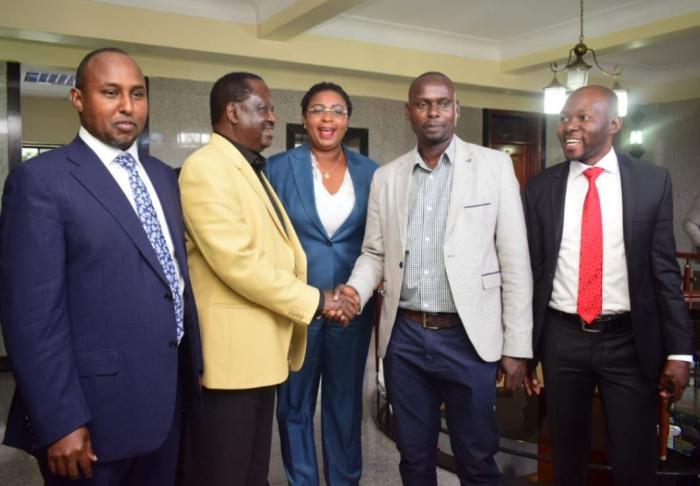 This was after photos surfaced online of the legislator with party leader Raila Odinga in parliament.

Taking to her social media the Malindi MP, who is allied to the Tanga Tanga team, maintained that she had not defected from the political faction.

Jumwa explained that Raila had made a surprise visit to her Parliamentary Service Commission’s Office refuting claims that she had not vowed to support the party’s candidate in the upcoming Kibra by-election.

“I have not dumped Ruto or endorsed Imran. Raila makes a surprise visit to my Parliamentary Service Commission’s Office this afternoon.

“This was after he attended the ODM Parliamentary Group meeting at County Hall that I did not attend!” she stated.

Following the meeting, the official ODM social media page tweeted the Jumwa had abandoned Ruto and returned to the party.

“Malindi MP Aisha Jumwa says ODM is her home and her DNA is ODM. She says she fully supports Bernard Okoth Imran, our candidate for the Kibra Parliamentary seat in the November 7 by-election,” read the now-deleted tweet.

The ODM Director of Communications Philip Etale stated that Jumwa had ditched Tangatanga and vowed to vigorously campaign for Bernard Okoth Imran for the Kibra Parliamentary Seat.